The OnePlus 8 launch is just hours away, and the Chinese smartphone maker will finally unveil its first flagships for 2020 to the world. Based on the teasers and rumours we’ve seen so far, we’re quite excited about some of the features the new series will be bringing for the very first time. Things like wireless charging and waterproofing have long been highly requested features from OnePlus fans and pretty much everyone else alike, and, it’s nice that we can finally expect to see some of them in the OnePlus 8 Pro and OnePlus 8.

We have done an in-depth roundup of all the important rumours, price leaks, and official teasers about the OnePlus 8 series, so do check it out if you want a deep-dive into what you should expect from the OnePlus 8 Pro and OnePlus 8.

In this piece, we’ll be focusing on just five of the top new features we’re excited to see or at least hope to see in the OnePlus 8 and OnePlus 8 Pro. The company itself has been dropping a lot of breadcrumbs on Twitter and its forums, teasing some of the new features coming to the series, so here are our top five favourite things we’re really excited to see.

From what we’ve seen so far, the design of the OnePlus 8 series will be an evolution of the OnePlus 7 Pro (Review). OnePlus has ditched the pop-up selfie camera for a hole-punch cutout, which according to the renders, doesn’t look so bad. I mean sure, it’s not as clean a design as the OnePlus 7 Pro and the OnePlus 7T Pro (Review) that featured pop-up cameras. However, the hole-punch seems pretty minuscule, similar to Samsung’s design of the Galaxy S20 series, and we don’t have any issues with that. It doesn’t seem like OnePlus has made any drastic changes to the layout of the rear camera modules, as it looks similar to the design of the 7T Pro. However, the display bezels in the front seem to have gotten slimmer and that’s always a good thing. 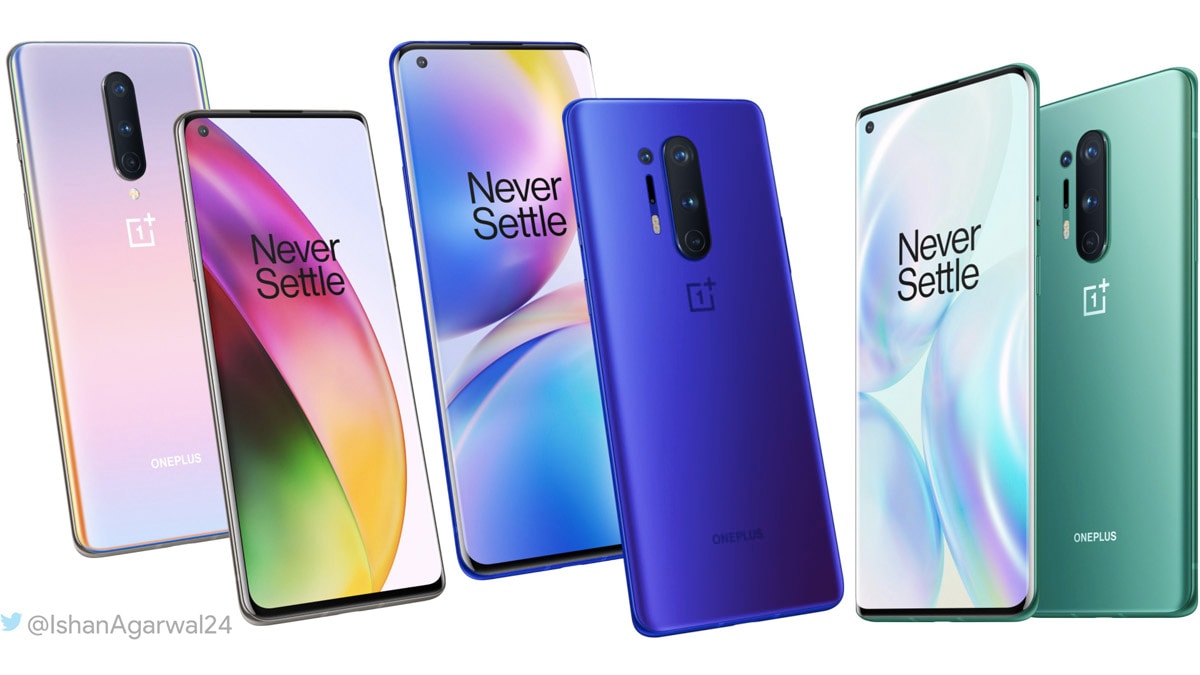 Next up are the colours. Along with some of the standard shades, we’re excited to see some brand new shades such as the rumoured ‘ultramarine blue’ trim, a confirmed teal-coloured variant and my favourite colourway which I like to call, the ‘Instagram Edition.’ It’s possible that some colours and finishes could be reserved for the top-end versions of the OnePlus 8 or OnePlus 8 Pro, just like OnePlus has done in the past. We will no doubt see more colour options down the line, but these launch variants look plenty exciting already.

OnePlus has confirmed that the OnePlus 8 series will feature a 120Hz display (expected to be limited to the top-end OnePlus 8 Pro), which is a natural progression from the 90Hz we saw on last year’s models. However, it’s good to know that you’ll be able to use 120Hz and a QHD+ resolution at the same time, at least on the OnePlus 8 Pro, accordion to a YouTuber’s teaser video of the phone. That’s a pretty big deal if you ask me. Samsung doesn’t let you do that on its Galaxy S20 series, where you have to either choose a faster refresh rate or a QHD+ resolution, but you can’t have both.

Having both 120Hz and QHD+ resolution could have a potential negative side-effect on battery life, but I like the fact that OnePlus is giving users the choice to do that rather than simply restricting you.

This is easily one of the biggest announcements OnePlus made, confirming that for the first time, the OnePlus 8 series will support wireless charging. It’s calling it Warp Charge 30 Wireless, which is said to be able to charge the new phone from 1 percent to 50 per cent, in just half an hour. It’s also said to support the universal Qi wireless standard and with the right adapter, it will also support up to 10W wireless charging.

OnePlus hasn’t talked about this feature too much but all rumours and teasers point to the fact that the OnePlus 8 series might finally get an official IP rating for dust and water resistance. Our money is on an IP68 rating, like every other flagship out there, but we’ll wait till it’s officially confirmed. A leaked image back in February sparked rumours about a possible IP certification for the new phones and a recent tweet by OnePlus India might have just confirmed it. The video in the tweet shows a man shooting a selfie video as he dives below water, with snorkel gear on, hinting that the new phone is waterproof.

If this is indeed true, then this is another anticipated box that OnePlus has finally ticked.

With any new flagship, there’s always new camera tech to get excited about. This is the year, most flagships so far are heavily focusing on zoom capabilities. Samsung is bragging about its ‘Space Zoom’ feature, which can do a 100x magnification in the Galaxy S20 Ultra, while Huawei’s recent P40 Pro 5G also boasts of impressive zoom features. Strangely, OnePlus hasn’t been talking a lot about its new phone’s camera capabilities. So far, all we’ve seen are some samples shared by co-founder Pete Lau, showing off the camera’s wide-angle capabilities in low light, but not much else. A peek at the rear camera layout on the OnePlus 8 Pro
Photo Credit: Twitter/ Ishan Agarwal

Going by leaked renders, we know that the phones will have a centre-mounted, vertical camera strip, with most likely three rear sensors in the OnePlus 8 and four in the OnePlus 8 Pro. However it’s still uncertain what these sensors might be. If we look at how the cameras from last year’s model could evolve, then we’ll could still expect a high-resolution primary camera (either 64 or 48 megapixels); a telephoto camera with at least 3x optical zoom and some kind of hybrid digital zoom system; an ultra-wide camera of course which would double up as a macro camera and maybe a forth ToF (Time of Flight) sensor in the Pro model. It’s still anyone’s guess what sensors OnePlus has chosen for all these cameras, so it’s still exciting to see what software and AI tricks are in store for the new phones.

What is the one feature you’re most excited for in the OnePlus 8 series? And if it’s there, would you be willing to switch from a OnePlus 7 series to the new models? Let us know in the comments.