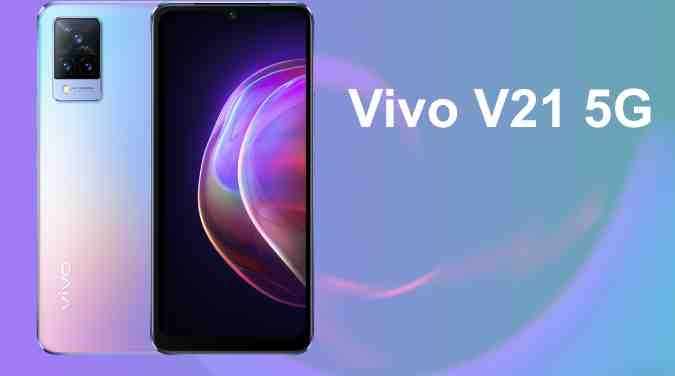 Thursday, 29th April 2021, Vivo has introduced a new smartphone in India; Vivo V21 5G. It is the successor of another smartphone Vivo V20 that was launched in India in the month of October 2020. The smartphone Vivo V21 5G comes with a triple rear camera setup that highlights a 64MP Main Camera. But the phone’s actual highlight is its 44MP Selfie Camera that comes with OIS (optical image stabilization). It has been launched with a dual-LED selfie flash.

With an aspect ratio of 20:9; the smartphone Vivo V21 5G has a 6.44-inch full-HD+ AMOLED display that features a refresh rate of 90Hz. An octa-core MediaTek Dimensity 800U SoC powers the handset. It comes in 8GB/128GB RAM/storage as well as 8GB/256GB RAM/storage models. Additionally, the phone has been launched with an extended RAM feature and it is said to allow the hardware to use up to 3GB of ROM as virtual RAM for an enhanced multitasking experience as well. It is a dual-SIM (Nano) device. The handset runs on Android 11 with Funtouch OS 11.1 on top.

In terms of optics, the latest smartphone Vivo V21 5G comes with a triple rear camera setup including; a  64MP Primary Sensor, an 8MP Wide-angle Shooter, as well as a 2MP Macro Shooter. The rear camera is paired with an LED flash module as well as an OIS support feature as well. As far as the selfies and video calls are concerned; the phone features a 44MP Front Camera and it supports  OIS also. Moreover, this front-facing camera is coupled with a dual-LED flash as well.

Connectivity options on the smartphone Vivo V21 5G comprise 5G, 4G LTE, GPS/A-GPS, Bluetooth v5.1, Wi-Fi, as well as USB Type-C port. The phone comes with sensors onboard; they are magnetometer, accelerometer, gyroscope, proximity sensor, ambient light sensor. It has been launched with an in-display fingerprint sensor as well.

From 29th April, the handset is available for pre-order. From 6th May (12pm) it will go on sale via Vivo India online store, Flipkart and major offline stores as well as retail chains. Additionally, Flipkart offers a 5% discount on the new smartphone Vivo V21 5G if one makes the payment by using the Flipkart Axis Bank Credit Cards.